Snow science is relevant to my life, because I participate in several snow sports and live in an area where snow is an important resource.  In addition, Colorado is one of the states where avalanches routinely occur which can impact human activities.

I now know that water and snow play a very important role in the American West.  Water is one of the most valuable resources in the West.  I learned that the Colorado River’s water is divided up between several states, and that the water doesn’t even reach its destination anymore.  If the demand increases, the water could potentially be used up before it is renewed.  I also learned that the Colorado River and other rivers are renewed by snowmelt from the mountains.

My collaboration skills grew due to the Snow Awareness Project, because I worked with one of my classmates, Trevor.  This was one of the first projects in which I actually worked with a partner.  Trevor and I divided up the work; Trevor typed up our notes while I looked for images.  Then, once it was time to place all of the images and words on the poster, I cut while Trevor glued them down.  I felt that we divided the work evenly and worked will together. 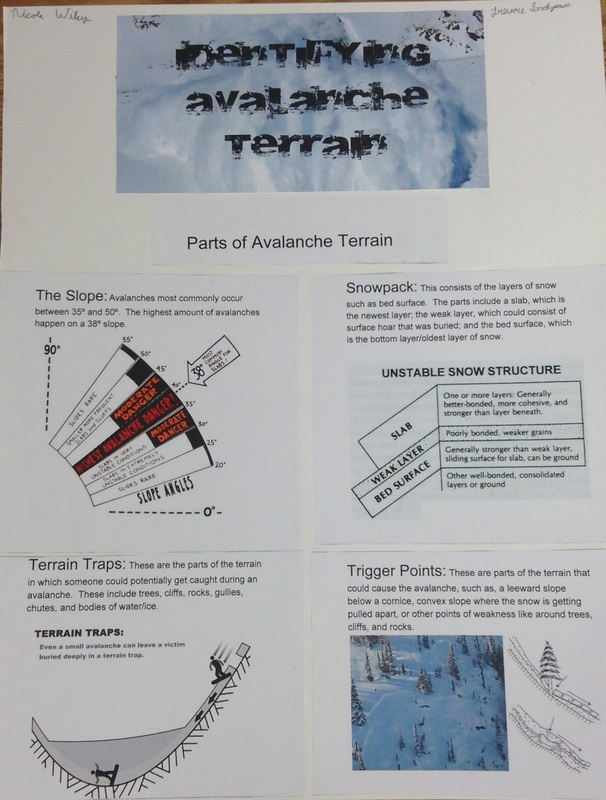 Our poster topic was identifying avalanche terrain.  It lists some of the various parts of avalanche terrain, such as slope, snowpack, and terrain traps.  Under each section, there was a description of that specific portion of the terrain and an image demonstrating that segment.